Donald Trump announced today that he is suing Facebook, Twitter Google and their CEOs as he accused them of “shameful censorship” and cancel culture.

He accused the companies during a press briefing on Wednesday of the “un-American” silencing of conservatives and of “destroying our country”.

It comes after the former president was permanently banned from Twitter following the violent storming of the US Capitol by Trump voters that left five dead.

He repeatedly posted false claims about election fraud as President Joe Biden gained seven million more votes than him and was accused of inciting violence. 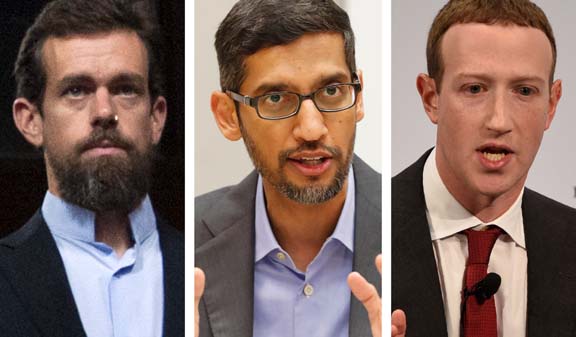 Trump also has a two-year suspension from Facebook and was hit with bans from Snapchat and YouTube, among others, this year.

In a news conference held at the Trump National Golf Club Bedminster in New Jersey, he said: “[We] are asking the court to impose punitive damages on these social media giants,’ he said. We’re going to hold big tech very accountable”.

He added: “I’m confident we will achieve a historic victory for American freedom and at the same time for freedom of speech.” The former president went on to claim the tech giants had engaged in a “flagrant violation of the constitution” by “shadowbanning” conservatives.

He branded social media sites as the “de facto arm of censorship by the federal government” and said they had been “weaponized.”